Universal Basic Income: Pro To a Country?
Back
News

What Is Basic Income?

A basic income is a form of social security in which all citizens or residents of a country receive a regular, unconditional sum of money, either from a government or some other public institution, independent of any other income.

Basic Income has the following characteristics:

1. Periodic: It is paid at regular intervals, not as a onetime grant.

2. Cash Payment: it is paid in an appropriate medium of exchange. The person who receives it can spend it on any good and service.

3. Individual: It is given on an individual basis, not given to a household.

5. Unconditional: it is paid without a requirement to work or to demonstrate willingness-to-work.

Why should a country have basic income?

“The assurance of a certain minimum income for everyone, or a sort of floor below which nobody need fall even when he is unable to provide for himself, appears not only to be a wholly legitimate protection against risk common to all, but a necessary part of the Great Society in which the individual no longer has specific claims on the members of the particular small group into which he was born.”, F.A. Hayek, Austrian Economist. There are many reasons to agree upon Universal Basic Income.

First of all, Robot-to-worker ratio as shown in the following table are rising rapidly in factories around the world. Also as the number of robots are increasing in the workforce, the cost of their implementation shrinks. The cost is very high for Asian countries such as Korea and Japan. 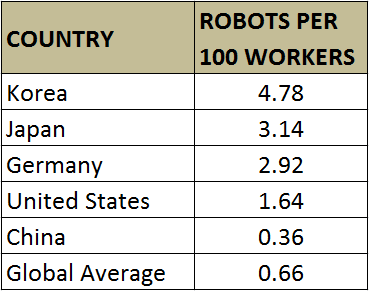 Automation stands to reduce opportunities for low wage workers in developing as well as developed nations. The reduction in jobs is more for developing world. That’s because those same jobs, in sectors like farming and manufacturing, have already mostly dried up in wealthier nations as corporations have moved their operations abroad, in search of higher profits through lower wage costs. The developing world stands to lose “about two thirds of all jobs,” according to one of the study. That’s a staggering figure, and well above most credible estimates for job losses due to automation in the West. The developing world is more at risk. 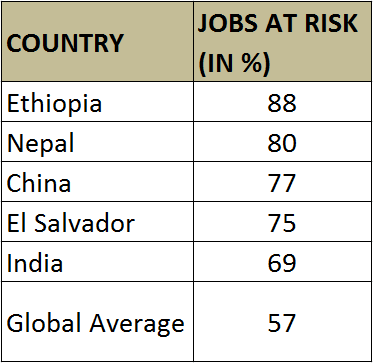 While the reports are talking about the effects of robots in the workplace, what’s really at issue is the profit-seeking behavior of corporations. And in a globalized economy, shifts in labour power aren’t just felt in wealthy nations, but all over the world. In China, for example, factory owners have already used robots and automation as a tool to do away with rabble-rousing workers.  Although the developed countries are also not much better off. 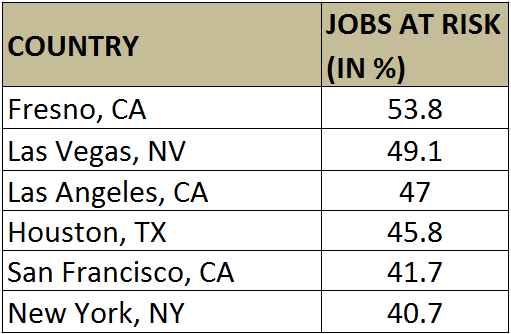 The countries with the most robots will likely see the greatest gains in productivity—but there is an upside for countries without enough wealth to bring in enough robot workers to stay competitive. Countries with a large pool of low-skill labor may excel in areas that robots aren’t great at yet, like garment-making. In other words, the cost of developing and deploying robots may be higher than paying next-to-nothing to a bunch of humans with already-nimble human fingers.

“Disruptive technologies always bring a mix of benefits and risks,” the one of the report says. Indeed, market-directed thinking often holds that if companies automate some jobs away, the economy will demand higher-skill jobs to take their place and eventually equilibrium will be restored.

To that end, the recommendation is education: teaching kids how to work with new technology so that they can step into the higher-skill occupations that haven’t yet been automated. But Overall there is bleak vision of the future: fewer jobs and only some people making money.

To account for this problem, having access to basic needs should become a right, not a privilege for the non-automated classes. It should be the responsibility of the corporations that have taken away working-class jobs to grant families this right—and the best solution would be in the form of a universal basic income. Companies will profit significantly from workforce automation, so the private sector will be able to afford shouldering this burden, while at the same time still making greater profits.

Thus, the answer lies in two of the most popular contemporary hot-spot topics in the modern media landscape: UBI and Automation. They could play into each other in a mutually beneficial fashion. Portions of the profits reaped by robots should be diverted to support this new system as humans inevitably phase out of the workforce.

Interest rates, the cost someone pays for the use of someone else’s money, tend to obsess the investment community and the financial m...