Risk of Investing in Russia
Back
News

Risk of Investing in Russia

For investors, Russia has ample economic and market growth opportunities. Since devaluation of the ruble and Russia’s financial crisis in 1998, growth in Russia has increased steadily to keep relatively on par with other dominant emerging markets such as Brazil, India and China. Equity markets in the country have soared. Between 2005 and 2010, the Russian stock exchange has delivered steady double-digit returns to investors, and the country’s performance is expected to continue showing sign of improvement.

Since its 1995 inception the RTS Index of 19 large cap stocks traded in Russia has been one of the best performing indexes in the entire world increasing in value from 100 to roughly 1500.

Despite this enormous increase in value Russian stocks are incredibly inexpensive, which is probably due to Russia’s inability to shed its communist image which leads investors to fear government over-regulation and taxation.

Beyond the most immediate concerns of the oil price shock and the impact of sanctions, the economy faces major hurdles in the long-term if sustainable growth is to be achieved.

Plentiful natural resources represent Russia’s biggest draw for investors. Oil and gas play a major part in the Russian economy in terms of production for internal purposes and exports. In 2010 the country had nearly 80 billion barrels of proven oil reserves and tops the world’s rankings for natural gas. Russia also has exposure to the energy industry through a number of key joint ventures throughout Africa and other energy producing nations. Russia’s heavy dependence on resources represents a risk. When you invest in Russia, you have to keep in mind the direction of commodity prices.

Russia’s reliance on the oil and gas sector poses a major challenge to the economy. The danger of this reliance has been brought into sharp focus by the low oil price. In 2014, mineral fuels accounted for 71.1% of the country’s total exports. Russia was the world’s largest exporter of mineral fuels in that same year. Russia must diversify its economy away from the sector in order to put growth on a sustainable footing. 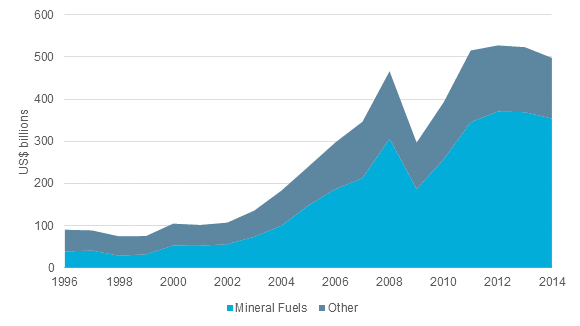 A lack of investment

Investment, a key driver of growth, is lacking in Russia. Gross Fixed Capital Formation (GFCF) amounted to just 20.6% of GDP in 2014, and fell by 5.6% in real terms in 2014. Foreign Direct Inflows plummeted in 2014 – a result of the slowdown, oil price and sanctions. The cumulative effect of this lack of investment is telling. Real productivity growth slipped to 0.4% in 2014 – measured in US$ per person employed.  Russia’s weak competitiveness cannot improve without a boost to investment. 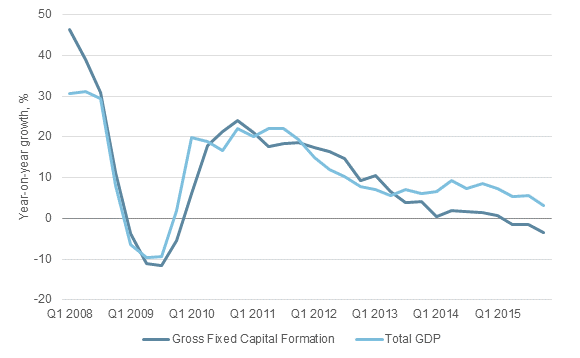 The business environment in Russia poses many challenges: from the extent of state ownership through to red tape and corruption.  In 2013, the OECD estimated the state-owned sector at around 50% of GDP, with the government pursuing policies to control “strategic sectors” and to promote “national champions”. The government’s response to sanctions preventing food imports from the EU for example, has been to promote self-reliance in the agricultural sector.  Regulatory quality is extremely poor, with Russia ranked 128th out of 202 countries in the World Bank’s rankings – placing it below much poorer countries such as Indonesia, Peru and the Philippines. 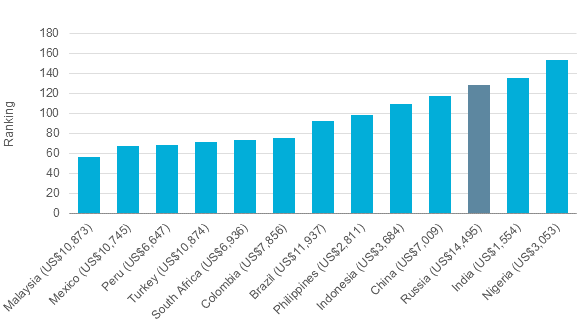 Infrastructure poses a serious challenge to doing business in Russia. The road network is a similar size to that of France, despite its land area being 30 times larger. In fact in terms of road network density (kilometres of road per km2 of land) it ranks bottom in Europe. This adds costs to doing business and weighs on productivity. In terms of the overall quality of infrastructure, Russia ranks 74th out of 144 countries in the World Economic Forum’s Global Competitiveness report 2014-2015 – behind other large emerging markets such as Indonesia, Mexico and China. 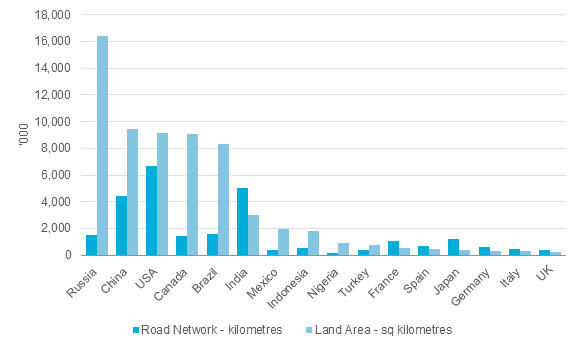 With the backdrop of sanctions and the deterioration of relations with the West, business and consumer confidence in the economy collapsed. On the consumer side this (alongside falls in real wages) has contributed to a decline in consumer expenditure; and on the business side, a lack of investment and capital outflows. Reversing the decline in confidence is imperative in order to meet the challenge of kick-starting economic growth. With the risk of an escalation of geopolitical tensions weighing on the economy however, confidence is likely to remain fragile.

While Russia offers high returns, it is dominated by energy companies, the state of regulations still under development, and there are political risks that are larger in that country than others. The striking feature of investing in Russia – the risks and rewards are both high.

When the largest generation in history is also the most socially conscious investor group the market has ever seen, business and social chan...