SEBI has recently stipulated the criteria for FPI. According to this, any equity investment by non-residents which is less than or equal to 10% of capital in a company is FPI. Any investment above this amount will be treated as Foreign Direct Investment (FDI). All FPI taken together cannot acquire more than 24% of the paid up capital of an Indian company. As per SEBI regulations, FPIs are not allowed to invest in unlisted shares and investments, and investments in unlisted entities are treated as FDI.

The Indian government has taken several measures to boost foreign investments in both equity and debt since 2014. The Securities and Exchange Board of India’s (or SEBI) FPI regulation of 2014 encourages and simplifies foreign portfolio investments in India. Let’s look at FPI in India in the below charts as of April 2017. 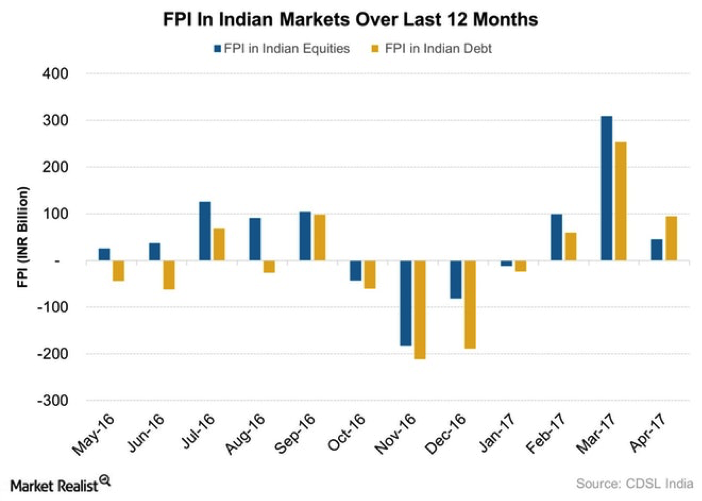 For the first time since the 2008 financial crisis, FPI in 2015–2016 saw net outflows of about 181 billion rupees as compared to an inflow of about 2,274 billion rupees in 2014–15. The FPI flows in the last two years seem to be on the lower side as compared to the average FPI inflows between 2012 and 2014. The turbulence in the global markets had led to an outflow of FPI during this period. 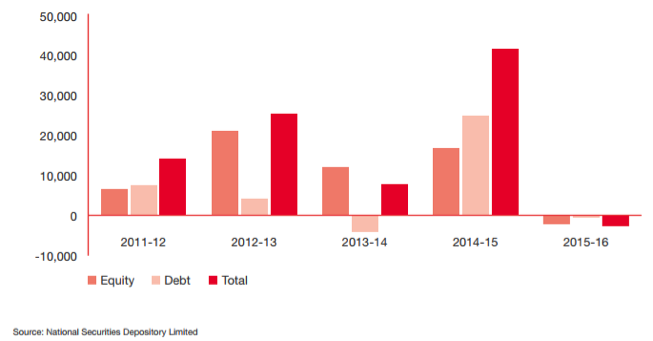 However, foreign investors pushed a record 557 billion rupees in Indian capital markets in March 2017. The increased investment was mainly due to the expectations of Bharatiya Janta Party’s (or BJP) victory in assembly polls to bring about bold reforms in 2017. The debt market seems to have suffered from large outflows as compared to the equities market in 2016–17. The massive pull-out has mostly occurred since President Trump’s victory and is in part due to the likely rise in interest rates.

However, the FPI flow in Indian ETFs has increased in the first couple of months in 2017. The Indian equities seem to be prime beneficiaries due to their recent outperformance against the MSCI EM Index. The domestic investors appear to have high expectations of policy reforms from the ruling government following their big win in the state elections.

The iShares MSCI India ETF rose about 18%, outperforming the EEM in 2017 from January 1 to April 5, 2017. The EEM has risen about 13% in the same period. Some of the stocks in the INDA to watch include Housing Development Finance (HDFC), Reliance Industries (RELIANCE), Infosys (INFY), and Tata Consultancy Services (TCS).

A FPI survey, conducted by PWC in 2016, shows that India is moving in the right direction. 67% of the people surveyed think India is a preferred FPI destination among emerging markets. 71% people rate India’s trade and settlement process as either “Great” or “Good”. 73% of investors would prefer direct access to the Indian markets over Overseas Direct Investments (ODIs). 63% think that tax rates on capital gains are reasonable in India. 67% are not satisfied with the time taken to complete the tax audit for a financial year.

Investors are happy with the regulator’s responses to queries and the trade and settlement process. Investment limits are reasonable, but there is scope for increasing the FPI investment limits in government debt securities.

Investors prefer to invest directly as against investing through access products in capital markets. The focus of the regulators in the country of investment is to have sufficient safeguards to ensure that these access products are not used for money laundering or tax evasion. These concerns and measures need to be balanced with the need for ease of doing business in India.

The continued independence and transparency of RBI and SEBI have also helped bolster investor sentiment towards India. We hope India continues to pursue structural reforms which will improve the well-being of its billion plus citizens, and in turn, further enhance its appeal as a business and investment destination.

How a Financial Crisis In China Might Play Out?

Impact of GST on Investments

The implementation of the goods and service tax (or GST) in India began on July 1, 2017. The Constitution Amendment Bill has replaced existi...